In May 2020, a gunman began shooting at a naval air station in Corpus Christi, Texas. The FBI believes the shooting was an act of terrorism. As
you go about your daily life a terrorist attack is likely not top of mind. Today you assume, will be like yesterday – ordinary and uneventful.

But as a Securitas officer, you must remember that your role requires you to stay vigilant. Terrorism remains a threat to our nation and it can
happen anywhere, at any time. Terrorists are successful when people are distracted and unassuming. By being alert and reporting suspicious
activity, you can identify threats and successfully intervene to protect yourself and others.

In this informational Guide, we will provide you a quick refresher on what terrorism is, key terrorist precursor behavior and what you can do. 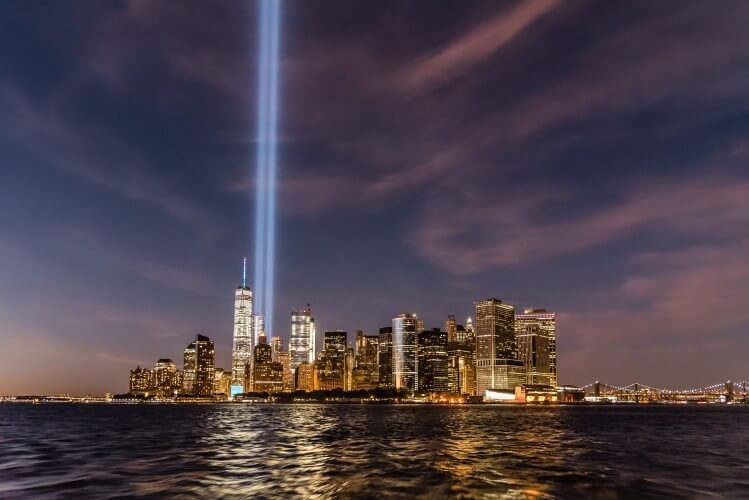 Why do people resort to terrorism? Terrorists are not all after the same thing. Some terrorists aim at violence against people and / or property for political, social or religious ends. Terrorism can be domestic, within the U.S. or international. Terrorists rarely act alone. They are part of larger groups and there are many different types of terrorist organizations with varying goals. A common goal is to make a big impact and achieve a strong emotional response. This is done by killing as many people as possible.

You cannot determine if someone is a terrorist by their race (physical characteristics), religion, political beliefs or ethnicity (culture, place of birth). Anyone could be a terrorist, including an American citizen. You must learn to focus on a person’s behavior rather than their appearance to determine if they are a threat.

Terrorists may rely on WMDS to cause massive damage and injure or kill large numbers of people. WMDS come in many different forms.

Biological weapons make people sick.
Nuclear weapons involve the use of a device that produces a nuclear explosion.
An Incendiary device is any mechanical, electrical or chemical device purposely used to start a fire (such devices are easy to get or make from materials anyone can buy).
A Chemical attack is the deliberate release of toxic chemicals with the intent to do harm.
Finally, there are Explosives – the weapon of choice by most terrorists.

The most important thing that you can do to guard against a terrorist attack is to observe and report any suspicious behavior. Terrorists don’t act on a whim; they carefully plan and prepare their attacks. This planning could take weeks or months. There are many indicators of possible terrorist activity. Let’s learn how terrorists may behave before and attack:

First, terrorists do their homework by learning about their targeted location. This is done to test the strengths and weakness of the site and to ensure their plans can be implemented. They find a way to study the location and visit it often. They may work at the client site, be a vendor, repair person, photographer or protestor. Detecting potential terrorist activity may be difficult. By focusing on the nature of the client site, the normal activities and routines about the day to day, you can spot and be aware of behavior that is out of the ordinary. Remember – when you are aware of the usual, you can see the unusual. Consider: Is someone loitering at the site or taking pictures or video? Someone invested in taking notes and drawing maps is demonstrating odd behavior. That should not be ignored.

Terrorists may also drop off packages or leave vehicles near or at the site. Why? The package or vehicle could contain a weapon that may be later detonated to inflict harm. They may also stockpile suspicious materials or deploy people near a key facility. Be on the lookout for suspicious packages and items or vehicles that appear to be left unattended. Things to look for: is the item / vehicle out of place? Is it missing a license plate, appears sagging or parked awkwardly? These are just a few things to keep in mind.

– Appearing Out of Place

Suspicious persons are those who appear to be behaving strangely. Rather than focusing on a person’s race, clothing or appearance, focus on what they are doing. You must also consider context. For example, is someone loitering near the site for an extended period without explanation? Have you noticed someone using binoculars or wearing a bulky overcoat on a scorching hot day? Are they drawing maps, counting paces or asking peculiar questions?

By knowing your environment, being familiar with the client site and the usual people that come and go, you will more easily detect the unusual. Take the appropriate action outlined in your Post Orders. Your Post Orders may suggest that you act as a visual deterrent and engage the person by asking, “how may I help you?” Document anything of interest in your Daily Activity Report.

Before carrying out an act, terrorists have to gather data. It’s difficult to determine what specific information they are after but fair to say their questions may appear uncommon.

Yes, all these questions appear odd. Don’t get defensive and don’t provide concrete answers. Gently push back by asking questions of your own, “Oh that’s an interesting question, why do you ask?” A terrorist may solicit information in person, by phone, email or mail. Questions commonly pertain to site logistics, shipments or business operations. It could be a customer or coworker seeking information outside of their area of focus.

Does someone appear to be checking doors or attempting to access unauthorized areas? If so, you should report this behavior immediately to your site supervisor.

Terrorists want to know how far they can get at a specific location. They aim to uncover weaknesses in the site’s security or observe access control procedures to see what’s possible. They may also attempt to take property from the site to learn the security team’s response procedures. Stay vigilant while on patrol. If there are cameras at the site, monitor them closely and make sure they are always working properly.

You may have no way of knowing if someone is harboring weapons, explosives or dangerous chemicals. But in your role as a Securitas officer, you may engage in a conversation with someone who casually mentions these items. Slips of the tongue can be revealing. Also, if your role includes access control you must carefully check bags, badges and/ or forms of identification for any inconsistencies. Get in the habit of noticing the uniforms of vendors and suppliers and the logos on vehicles so you pinpoint anything that appears out of the ordinary

Practice makes perfect therefore terrorists usually facilitate dry runs to work out any flaws in their planned attack. This can include monitoring key facilities, playing out scenarios, mapping routes or timing traffic flow.

When you go to work, it’s easy to overlook routine moments. But as you’re going about your day, if you see something that doesn’t seem quite right, say something.

A terrorist attack is rarely seamless and there are always precursors. Report any suspicious behavior immediately. If you detect a small thing that seems out of place it could help to prevent a big occurrence later. Document your observations, thoroughly and accurately. Follow your Post Orders. Call 911 if you feel you or others are in immediate danger.

You are already trained to detect, deter and report. Your presence and observations can help to mitigate threats. Be mindful that as a Securitas officer you are at the client site to avert the loss of property and valuables, but more importantly, to avert the loss of human life as well.

1. A common goal of terrorists is to make a big impact and achieve a strong emotional response.

2. To determine if a person is a possible terrorist you should focus on their

3. Which of the following is not considered a type of weapon of mass destruction (WMD)?

4. As an officer, the most important thing you can do to guard against a terrorist attack is

A. Observe and report any suspicious behavior (correct)
B. Approach any suspected terrorist and demand their identification
C. Call the police if anyone appears out of the ordinary
D. Bring a weapon to work

5. Which of the following could be considered suspicious behavior/ activity

A. Someone loitering at the site and taking pictures and video
B. Someone asking invasive questions about the building or security
C. An oddly parked car or van left unattended for an extended period
D. Someone who appears to be checking doors or trying to access unauthorized areas
E. All of the above (correct)

This was just a refresher and I hope you guys are more aware now. Mostly, I would suggest you guys to study this over and over. And, keep in mind that you can make a difference. Many people don’t take this seriously and this refresher is a reminder that you should. Don’t read it once and throw it away, read it couple times so you can remember. In most cases just try to look for anything unusual and notify you supervisor if you come across something unusual.